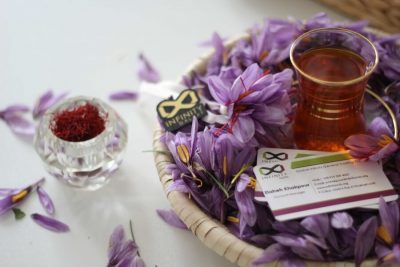 Saffron, also known as crocus, is a precious flower that produces saffron spice. The styles of flower, have a sweet aromatic smell with a bitter taste that is popular in culinary and cosmetic industries. In this article, we tend to discuss the most precious spice, saffron. In the following, we talk about its types, details, and benefits.

The bitter and strong aroma of this red precious spice is due to the presence of a colourless essential oil with terpene and an oxygenated combination with cineole, called safranal. To be more specific, they relate the taste to the bitter heteroside of picrocrocin, which is soluble in water and alcohol. Besides, it is rich in carotenoids.

Additionally, the moisture content is about 10-12% and the mineral compounds are about 5%.

The beneficial content of saffron and its active ingredients affect various organs of the body including:

Scientists have found numerous therapeutic properties of saffron, including:

How to Store Saffron?

especially before and after grinding, should be kept away from light and moisture, in a closed container. Since its aromatic substances can evaporate, if you store it improperly, it will lose its aroma over time. In the case of air and light exposure, its medicinal effects and taste decrease as the quality fades.

The most common way to consume spice is to brew saffron over warm steam in countries such as Iran. Local people usually ground the threads with mortar and pestle to release the taste and colour faster and efficiently. After grinding, they pour some boiling water on it and let it rest for 10 – 15 minutes. The rest helps extract saffron’s taste and colour better. The amount of water should be less than a third of the glass and its saffron be about a tablespoon or more.

The second method that we can refer to is the use of ice. For this method, it is better to put it in a container after grinding and place small ice cubes in it. Let the ice cubes melt at room temperature and the extract comes out.

Generally speaking, the primary uses of saffron include food, medicine and chemical (industrial). Saffron gives a special aroma and colour to food; therefore, industries such as sausage making and confectionery use it to give their products a nice smell and taste. In pharmaceutical industries, experts use it in antidepressants. The textile industry also uses saffron in the case of dyeing silk fabrics. Dairy production and alcoholic beverages, and non-alcoholic industries use saffron as a natural flavouring as well.

Product farming is relatively simple but it needs some specific climate conditions. Its harvest cycle takes 3 – 4 months, and it might reach a height of 15-20 cm. The soil must be fertile and moist soil. The plant is grown in dry places. Harvest of Product is difficult due to its sensitive style. But the procedure is significantly lucrative if the farmer pays attention to the quality. Here are several benefits of saffron cultivation: