They contain essential vitamins, minerals and antioxidants and are good for a variety of sour and sweet foods around the world.

As mentioned above, raisins, currant and Sultana raisins are different types of dried grapes. Understanding the difference between them may be a bit confusing, especially for currants and Sultana raisins, because they have different definitions in different parts of the world. For instance, in the United States, the term “raisin” is for both raisins and currants. The only difference between them is that the “golden” raisins are as Sultana raisins. But globally the story is different. In most countries, including the United Kingdom, they distinguish raisins and currants according to the type of grapes and their processing method. To avoid confusion, in this article we examine the differences between these three types of dried grapes according to global definitions.

Raisins are a type of grape that has dried for three weeks. Besides, grapes darken when dried, so raisins are dark brown. To be more specific, a wide range of grapes is essential to prepare raisins. The size, taste and color of raisins depend on the type of grapes. In the United States, raisins are usually from seedless Thomson grapes. But in Australia, raisins are specifically from larger grape varieties, such as Muscat, Lexia and Waltham Cross, and are therefore larger than Sultana raisins. As the final point, raisins have a dark color, soft texture and sweet taste, and are often larger than other types. 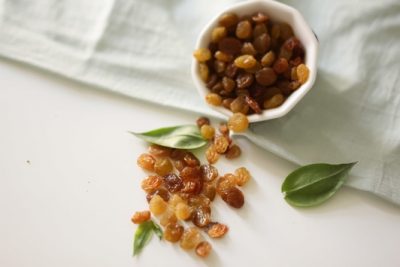 Sultana raisins are from seedless green grapes, especially Thomson. Unlike raisins, royal raisins soak in a kind of acid before drying to dry faster, so their color is lighter than the other types.

In Australia, they produce some Sultana raisins without putting it in acid, so they dry later (about three weeks).

That’s why they have another name which is “natural” sultana raisins. Additionally, in the United States, royal raisins or “golden raisins” are often given a preservative which is sulfur dioxide to keep them light in color. Note that royal raisins are smaller than raisins and are sweeter, juicier and brighter than other types.

Small dried grapes are currants and are usually from drying small, seedless grapes, such as ruby ​​grapes and carina, within three weeks. Besides, they are sweet and fragrant and are good for using in sour or sweet foods because of their small size.

As a conclusion, raisins, Sultana raisins and currants are all different types of dried grapes. However, raisins are soft, sweet and juicy, while currants are fragrant and have a sweet taste. Usually, the size of the raisins is bigger than the rest. 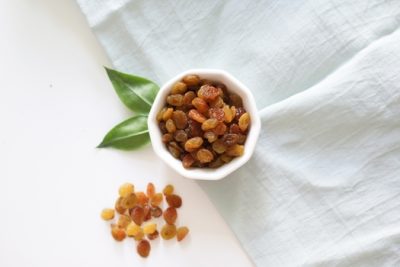 As you may know, raisins, currants and Sultana raisins are very nutritious, and this is due to their drying process, which reduces the amount of water in them from 80% to 15%. During this process, the grapes shrink and become a small, dry and very nutritious fruit. In fact, dried grapes have four times as much fiber, vitamins and minerals as fresh grapes. As mentioned before, they all have a high natural sugar content of about 65 to 70%, are also high in fiber and potassium, and are an excellent source of plant compounds, including powerful antioxidants.

On the other hand, the amount of vitamin C and vitamin K

in these dried grapes is greatly less than the fresh grapes.

So, raisins, Sultana and currants all have similar nutritional value and are all rich in fiber, potassium and antioxidants. Moreover, they are high in sugar and have less vitamin K and vitamin C than fresh grapes. Now, let’s take a look at the health benefits of these fruits.

It’s interesting to know that their health benefits are the same.

In other words, they all help your health in distinct ways. All three are rich sources of antioxidants, including polyphenols.

Since these injuries can lead to inflammation and many dangerous diseases such as cancer.

In addition, raisins, Sultana and currants are rich in fiber

the risk of high blood pressure, heart disease and diabetes.

that eating Sultana raisins can lower blood pressure, control blood sugar and increase the feeling of freshness and vitality.

Eventually, although raisins, Sultana raisins, and currants can be healthy choices, it is important to remember that dried fruits are high in sugar and calories, and over-consumption is not good.

For this reason, you should only eat dried fruit in small amounts,

preferably with other nutritious foods such as nuts, seeds, or yogurt.

On the other hand, they are high in sugar and calories and you should consume in moderation.

Keep in mind that these three types of dried grapes, despite their slight differences

in taste and size, can be in many recipes and can easily replace each other.