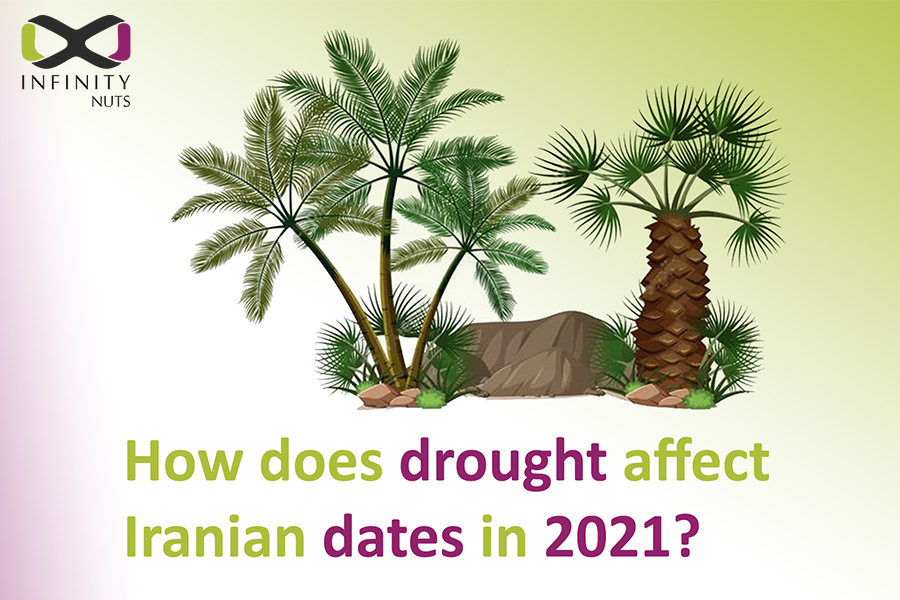 How does drought affect Iranian dates in 2021?

Well, drought does not change the volume and quality of dates in the short term. In highly humid regions, lower rainfall has even reduced the extra humidity. Therefore, gardeners will harvest better dates. Iran produces around 1.2 to 1.3 million tons of dates per year. The production level might slightly vary annually because of different conditions. For instance, some provinces might be more or less productive than the former years. However, the quality and total volume of production will remain the same in 2021.

Generally speaking, the role of dates in our economy is determined by

increasing the number of countries that buy dates, which are divided into two categories:

1. Developed or industrialized countries that buy high-quality dates. These buyers consume dates as non-main food (snacks or desserts) and mostly buy them at high prices.

2. Countries with food shortages. These countries consider dates as a

staple food and, naturally, they prefer the cheapest type.

As you might guess, buyers of high-quality dates are mostly from Europe,

the United States, Canada, and Australia. On the other hand,

buyers of cheap dates are mostly from China, India, and the former Soviet republics.

A) Dates Used in the Domestic Market

In Iran, Rotab is more popular than dates and one of the best and most durable

southern provinces of the country such as Kerman, Sistan and Baluchestan, and Hormozgan.

Khuzestan and the cities of Abadan, Khorramshahr, Ahvaz and Shadegan. We know these date cultivars as one of the best date cultivars in the world and have all the characteristics of first-class edible dates.

As a matter of fact, dates are preferred by the foreign market and increase the importance of dates that have a high juice content and semi-dry dates with a moisture content of 18 to 22%. Therefore, using technology,

the humidity of different dates should be adjusted evenly between 18

and 22%. Moreover, the preparation operation for the export of dates starts from the date on the date tree and continues until the date of packing.

Importance of dates in terms of exports in Iran

Iran’s dates market is booming in countries such as the United States,

the Soviet Union, India, Pakistan, Canada, and etc. Respectively, half of the world’s dates are produced by Iraq and Egypt, with Iran in third place. Algeria and Morocco are also important exporters of dates. In Iran, the provinces of Khuzestan, Fars, Kerman, Baluchistan, west of Kermanshah, and Qasr Shirin are the regions that produce dates, respectively. Besides, of the 20 million palms, 27% are in Khuzestan, 29% in Fars, 25% in Kerman, and the remaining 9% in Sistan and Baluchestan. Dried dates are mainly in

to mention that the chief buyer of dried dates are in India,

who buy about seventy thousand tons of dried dates a year.